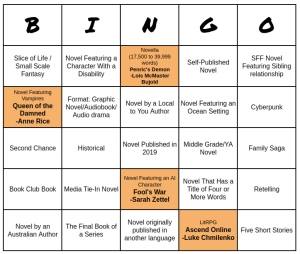 I was going to do a general review of this book, for everyone, but to be fair, if you’re not into role playing games on some level, it’s highly unlikely you’re going to appreciate or enjoy this niche genre-within-a-genre. Not that there’s anything wrong with that, it’s just that the novel plays with the structures and tropes of RPGs which it is helpful to know before you dive in. So, if RPGs are not your schtick, turn back now, or brace yourself for acronym soup.

I love RPGs (though I don’t have time to play as much as I’d like) so when I discovered the RPGLit genre I was all over it there for a bit. Since the goal is to get a “real” person into a game situation, and there are only a few ways to do this somewhat realistically, there are two or three plot devices generally found in most of these books. A common one, which is used in Ascend Online, is that a person already familiar with the concept of RPGs, somehow gets involved with an early release of a new highly immersive technology to allow players to be “in” the game. Ascend Online uses a full haptic body pod to give players a full sensory experience, as opposed to, say, a neural interface or uploading of consciousness. Marcus and his guild are huge gamers who are among the first allowed into the early release and excitedly report to a gaming centre to be installed in their pods. We follow Marcus as he creates his character, Lyrian, and then is released into the game. Unfortunately he is placed in an area far from the rest of his guild and gets involved in an adventure much different from theirs. We follow him as he levels up his character, acquires skills, abilities and loot.

This is where the RPGLit genre really caters to fans of the gaming genre, because the character creation process, all the skills acquired, all the character traits and items gathered are described in exhaustive detail, exactly as they would be in the game: stats, levels, lengthy descriptions and all. In fact, every time Marcus accesses his character’s stat sheet, it is reproduced in every particular, covering multiple pages, as it would be shown on a console screen. On the one hand it serves to remind you that you’re in a game, and that the character is levelling up, but it brings any sort of narrative to a crashing halt. I suspect all but the most hardcore stats nerds would just skim it whenever it comes up – I did. Plot points are presented as quests (A spider bum rushes you, you kill it, you are then presented with a prompt <You seem to have stumbled into a spider’s nest. They could cause a lot of crop damage. Maybe you should take care of it. Do you accept? Y/N>)

Something that is explored extensively in Ascend Online is a theme that also appears in other LitRPG books, the treatment of non-player characters. In RPGs the non-player characters, or NPCs, are the characters that the game creates for players to interact with, to help them on quests and to make the world feel real. Many players understand that they are just game-created constructs, and use or kill them in whatever way the game requires. But since the gaming in the LitRPG universe is so immersive and real, some players feel that the NPCs should be treated as equally human players, or at least better than point fodder. This tends to define the “Good” characters from the “Bad” characters in Lit RPG.

Marcus, instead of being dropped into the same area as the rest of his guild, falls in with a settlement that is just getting started. He helps them with a goblin problem, makes friends with the NPCs and integrates himself with the life of the village. When his friends arrive several game-days later from the location in which they spawned, they also treat the NPCs like real people, and set themselves up as guardians of the village, ready to protect it from the players who will come and treat the villagers like so much code in order to gather loot and level their characters. This forms the loose plot upon which the character levelling, which is the main appeal of this genre, hangs. In preparing for this influx of “bad” players, Marcus and his guild level up their combat, crafting and magic skills, and solve quests, increasing their characters’ usefulness within the game.

About the only thing that I would nitpick is the plot device that takes it from primarily science fiction to fantasy – the introduction of a god character. I don’t know why the author chose to introduce randomness in this way, but it kind of took me out of it. Other than that, I really liked this book. There are some truly dire representations of this genre (including a whole subgenre classified as harem – I’ll let you figure that one out for yourselves) but this one is pretty decent. So much so that I have read all three books in the series so far.

This entry was posted in Books, Life and tagged books, gaming, RPG. Bookmark the permalink.