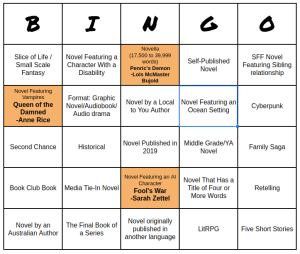 At 35K words, Penric’s Demon squeaks into the novella category, but if you haven’t read any of Lois McMaster Bujold’s longer fiction, this is an excellent introduction to her style. You may have heard the author’s name, as she is the writer of the so-called Vorkosiverse space opera-ish books based on Miles Vorkosigan, of which there’s upwards of 12 or so, and which are hugely popular. Penric’s Demon is a fantasy novella, set in the World of the Five Gods, where gods are real, magic is real (though used sparingly), and possession by demons is part of a job description. So far it includes three full length novels, and seven novellas. Lord Penric, and his resident demon Desdemona, is/are the main character(s) of the novellas and this is the first one of the seven, detailing how Penric came by Desdemona and how, by having possession thrust upon him unawares so to speak, he redefined the relationship between a person and their demon.

The main positive about Bujold is that she is an excellent writer (clearly, having won both multiple Hugo and Nebula awards). Her characters are always well fleshed out, her dialogue is realistic, and motivations and plot development are well thought out. The universes she creates are just as compelling as the characters and she can clearly write both fairly hard SF (Vorkosiverse) and fantasy (World of the Five Gods). The world of Penric’s Demon is a late medieval/early renaissance analogue with lords and castles and magic and sapient animals and actual gods who occasionally work through humans. But the story really is about Penric, a young man who has his entire world flipped upside down after the accidental acquisition of his demon. But rather than allowing himself to be manipulated by those who feel they are more qualified to ‘fix’ the situation, Penric uses his considerable intelligence and personal charm to sort out the situation for himself.

I cannot recommend these books (this author, really) highly enough. Very quickly you become invested in the story of both Penric and Desdemona, and you’ll be quickly reaching for the next novella in the series.

perambulations around london ( .. and beyond)