In an attempt to blog more regularly, I’m starting a season of Book Review Bingo. Now, I know this sort of thing is usually done around the beginning of the year, kind of a New Year’s Resolution thing. But even though school is long behind me, September always feels more like the beginning of the year to me than January, and so it seems like an appropriate time to start a new project like this.

I’ve been devouring books pretty solidly recently and I have some that I’d like to talk about and that I think deserve some recognition. I’ve adapted the 2019 Bingo Card from the one used on the r/fantasy subreddit, though I did leave some just as they were. I will be including both new books that I’ve just read, but also a few that I’ve read before, which I will reread for bingo purposes.

My Bingo Card is here: 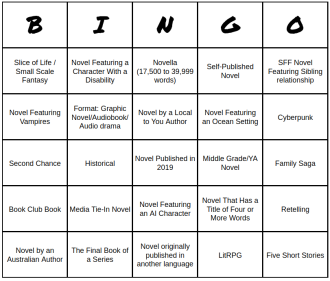 As befits Bingo, I won’t be doing them in order. And I realise some of the descriptions are a bit vague – they will be fleshed out at the time of the review. I’m planning one to two weeks between reviews. Stay tuned.

perambulations around london ( .. and beyond)