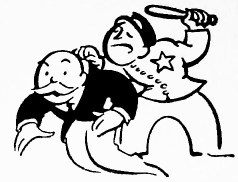 One of the most interesting TV shows this past few months is a mid season replacement called APB. The plot can basically be summed up as ‘Elon Musk buys a police station’. Literally, that’s it. Barely fictionalised billionaire spends his money and his genius to help poor but honest cops fight crime in one of Chicago’s worst precincts.
When this show started I was certain there was a ‘political’ motive, sort of a shaping of public opinion, going on, but I couldn’t put my finger on it. It took me a few episodes but I believe that it
might be ‘billionaire shaming’. Why should Elon Musk ‘waste’ money going to Mars, and Bill Gates ‘waste’ money eliminating diseases in the third world, when there are issues right here in the States that could benefit from their money and technical expertise.
If this sounds like someone put a little too much thought into a more or less forgettable one hour drama, consider the Lear Center whose raison d’etre is to insert political agendas into TV shows, which proves that this sort of thing does exist. The next time you see a heavy handed mention of climate change in your favourite sitcom, thank the Lear Center.
Now for all I know it this show doesn’t have a political agenda, that it’s just a quasi scifi/cop drama crossover greenlit by a bunch of suits concerned only with the studio’s bottom line. But if you were a government policy wonk whose job it was to think of ways to influence public opinion via TV shows, you might want the public to start thinking that space race money could be better spent closer to home. And if you’re a politician, why not try and get some billionaires to fund a few programs that you don’t want to.
And while I believe that the space race is not wasted money, and is in fact a long term investment in humanity, that opinion is not universal and I would imagine it’s difficult to see the big picture when you can barely walk the streets of your hometown for the bullets whizzing by.
Also I am even more convinced of my thesis now having seen a recent episode. Not only are they shaming the billionaires, they are tempering the message by showing how it can be done while turning a profit, by turning his CFO into a recurring character.