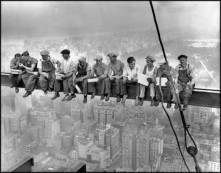 I saw this map of most common professions by state, by year, the other day and it’s interesting to see the professions change as technology advances. In 1978 it’s pretty evenly divided between farmers, secretaries and factory workers. By 1987, a scant nine years later, farmers are down to a few states, secretary is quite widespread and factory worker has actually disappeared. By 1990 truck driver is on the rise and by 2000, truck driver is the #1 occupation in 40 of 50 states. 2010 & 2012 show the most diversity of the whole cycle, with actual professional occupations like registered nurse & primary school teacher showing up. Secretary, once the most common occupation is down to four states.
When you think of how few people the modern office gets by with, it’s staggering. Part of it is down to modern workplace economics, which views employees as the most costly and easily expendable of a company’s assets, but a large part is also down to technology. My mom ended her working career as a secretary to a director of sales, just as computers were starting to make their appearance in the office. She had to turn his on for him every morning & answer his email, as he was clueless (so was she, but she had to learn, he did not). Now directors of sales are glued to their iPhones, sending their own emails  and their assistants serve teams of executives, not just one.
Except in high-end places where appearance is everything and an attractive woman on the front desk is SOP, a dedicated receptionist has been replaced by a sophisticated PBX and a card entry system. Typing pools have been replaced by Word templates and email. Entire accounting teams have been replaced by Quickbooks. The things I do with an Excel spreadsheet on a daily basis would have once been someone’s whole job, eight hours a day, five days a week. Probably more than one someone. Now hours of work can be accomplished with copy/paste & a macro leaving me time do the jobs of two other people. Note, I’m not saying I’m overworked, I’m saying that thanks to technology one person is able to do the work of three or four. But what of those other four?

Pity the poor truck driver when self-driving vehicles hit their stride. I’m sure one of the perceived weak links of the trucking industry is fallible humans who need to eat, sleep and pee. What is one of the most common jobs in the US will be relegated to history once industry can dispense with them. What of those people? Will we ever have full employment again, or a situation where there is more work than people to do it?

4 Responses to Not now, I’m busy being four people